DOMINICAN PEARL: LIVE AND WORK ON THE BEACH!


OCEAN POINT I Beachfront Condo in Cabarete, DR. Live in Paradise on Earth! Cabarete is famous worldwide as a kite surfing destination with average temperatures at 25C/77F and water temperature at 26C/79F. It is one of the 5 UNIQUE destinations in the world famous for its stable winds practically ALL YEAR long, which attracts wind and kite surfers from all over the world.
This beachfront condo right at the Kite Beach is offered for sale at only $450,000. About 6 years new it is located only 30 minutes from an International Airport in Puerto Plata.
It is a 3 bedrooms, 2 bathrooms, 1800 sq.ft (180 sq. m)unit with open floor plan in one of the best complexes on the North Coast of the Dominican Republic. It offers a large balcony and an inside laundry and is located in the first floor of the building that is closest to the water line - within 60 ft/20m.
OCEAN POINT I is a 24/7 guard gated community with its own parking, 2 pools, BBQ and a playground for kids. Nice neighbors from all over the world.
OCEAN POINT I is the closest one to the wind and kite surfing school - only 150ft/50m. Walk to cafes and restaurants - the whole 300ft/100m! Or spend time in the central part of Cabarete which is only within 1km. Walk everywhere or drive - it is your choice!
This place would make a perfect year round residence or as a second/vacation home. Come occasionally to  enjoy warmth of the ocean and rent out the rest of the year. Rents for $2000-3000/month depending on terms, or $200-300/night average for short term. Only 1 hour away by plane from Maiami, FL and Havana (Cuba), North coast has not experienced any storms/hurricanes in decades. Flight time to New York - 3 hours, to Europe - 7-8 hours.

Dominican Republic is a great place on Earth with favorable environment for foreign capital and rather simple visa requirements for tourists: for visitors from a number of countries entry visa is not required, others can obtain it right at the airport upon arrival for $10.00 per person. http://oceanpointiste111.2seeit.com/
Posted by Your Personal Real Estate Advisor at 10:14 AM No comments:


It's a hot day, sunny and bright, like most of the days in SoCal. I almost feel like I am a paparazzi or some famous photographer carrying out my job description somewhere far from home. The sky is so blue you almost need sunglasses to keep you from flying away into the skies so pretty it is! But oh well, it's my "normal" work day - I am a Realtor and 856 S Cardiff St in Anaheim is my new listing! In one of the oldest cities of world famous OC, baby! And I am getting this new listing of mine at 856 S Cardiff St ready for showings and sharing everywhere. God Bless technologies and those who came up with all these gadgets, fun ways to stay in touch and a way to be almost invisible yet noticeable! Come and visit us here at 856 S Cardiff St Anaheim, California 92806! Simply call or sms me to set up your private viewing - morning, day time or evening, weekends included - 856 S Cardiff St Anaheim is ready for you!
Calling on ALL BUYERS:
First time buyers, current homeowners who are downsizing or moving up,
relocation buyers, investors...
This property could be your new home: inviting, comfortable, very functional and conveniently located in the heart of Orange County.
856 S Cardiff is a GREAT home in a popular family neighborhood in Anaheim. Numerous upgrades include: custom double door entry, custom crown molding and really nice baseboards throughout, a very consistent color pattern throughout includes wall paint, bathroom tile, flooring; custom fireplace mantle, open dining room, kitchen with custom tile counter tops with designer back splash, stainless steel cook top, oven, sink, spacious pantry, recessed lighting w/upgraded custom molding, double pane windows with custom casing, pedestal sinks in bathrooms, upgraded shower heads and faucets. French doors to back patio & backyard create a nice touch of a finished look. Ceiling fans in each bedroom and double pane windows make this comfortable all year long. Spacious back yard with plenty of room for fruit trees, decorative paradise or a pool. Or simply use as it is with grass and planters, basketball court and enough hard surface for BBQ & a large table for your family to enjoy SoCal living. Nicely landscaped front yard with large driveway fits additionally 6+ cars. Ann added suite (the 5th bedroom with its own bathroom) would make a great suite for in-laws or guests. If you work from home it would make an excellent office as it has its own access to the back yard which could be used as an entrance for your business partners or vendors. 856 S Cardiff St allows lots of natural lighting, excellent airflow, warm feeling of a family home. It totally is in a Move In condition: just unpack and call it your home! Walk to Anaheim Coves Trail and Santa Ana River from 856 S Cardiff to relax or exercise. 856 S Cardiff is about 3 miles from Honda Center, Angels Stadium, Platinum Triangle! It is within easy access to major roads. In fact, this location is also favored by wildlife - to me it is a very positive sign! By the way this guy on the picture below was my first guest even before I put up my signs and held my first open house. It felt like he came specifically to check on what I was doing in his neighborhood. 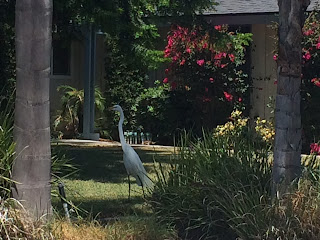 Another “Horror” year in Real Estate?

It is amazing how much power the mass media has in creating public opinion. Sometimes I feel like it orchestrates everything we talk about, the way we think and the way we feel. That is getting really dangerous time to time, especially when it comes to real estate. How many horror stories have I heard and read in the past several years about the diving market, the danger of investing in real estate, etc, yet real estate remains one of the most stable investments. Might be not as fast on the return as stocks, some would say, but more secure, that is for sure.

Today I decided, instead of talking about some forecasts or looking back at what real estate markets in 2006 looked like, to bring some facts to your attention and sort of let you decide whether 2006 was a horrible year for real estate here, in , and whether year 2007 will be a bad or a good one.

California Association of Realtors just announced some of the key numbers in real estate in 2006. According to CAR, we have a bad news and a good news.

The bad news: the number of home sales decreased 15.3 percent in December compared with the same period a year ago.

The loss for the sellers is a huge gain for the buyers: Unsold Inventory Index for existing, single-family detached homes in December 2006 was 6.8 months, compared with 3.5 months for the same period a year ago. The index indicates the number of months needed to deplete the supply of homes on the market at the current sales rate.

The median number of days it took to sell a single-family home was 73 days in December 2006, compared with 43 days for the same period a year ago.

And a personal comment: overall year 2006 reminded us, licensees, that in reality our work takes a lot of time, efforts, investments, professional skills and patience. It also reminded some of the sellers that there is a limit besides sky. AS well as it showed the buyers that they do not have to fight over a property they like against 10-15 other buyers, and it is not that stressful to buy real estate in . I also was really glad to see some of my clients move into their first, brand new homes, fulfilling their “American Dream”! Yes, 2006 was a different, I would say difficult year, yet the sanity came back to the real estate markets in .

If you would like to get detailed statistics on your city or community, please e-mail me at olesya@realestatebee.com You can also go to my brand new blog: http://homesfromolesya.blogspot.com

Posted by Your Personal Real Estate Advisor at 10:34 PM No comments:

Homes Around the World

We bring homes to you. With trending globalization we never know where and what our next home might be. This is a place to see some unusual or unique homes.